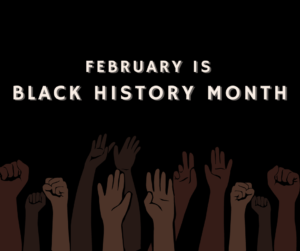 I believe there are two core reasons why we should continue acknowledging and celebrating Black History.

First, due to systemic discriminatory policies and practices, Black people to have fewer opportunities and financial resources. We are more likely to live in poverty, have lower educations, and are more likely to face unemployment. Historically, the median income for Black households is much lower than white households by just under half. And, while the United States has an overall poverty rate of 11.4%, the Black community experiences a poverty rate of 19.5%. while the non-Hispanic, white community is only 10.1%.They also have poorer health outcomes due to a lack in medical resources and insurance. And Black children are almost three times more likely to live in a food-insecure household than white children. In fact, in 2020, almost 25% of the Black community experienced food insecurity (Feeding America).

The Black community is still struggling, still hurting, many decades after both the emancipation of African-Americans and the civil rights movement. While these historic events did much to advance the rights and freedoms of Black people, more than a century later there is still much to be done before we achieve equality and equity for the BIPOC communities, in particular the Black community. Highlighting what Black communities have faced, and continue to face, is important to making the necessary changes that will bring about better outcomes and way of life as everyone deserves.

Secondly, white history has already been well documented and taught as the main narrative of the past. Black History Month is a recognition and celebration of Black culture and all the contributions made by Black Americans in the rise of our country and the personal achievements they’ve had as a people.

There is power in these stories of great triumph and resilience. They are stories of amazing people who overcame adversity in so many ways and still rose to great accomplishments; how they couldn’t be broken or crushed. It’s an acknowledgement of what perseverance and true faith is and how the human spirit can rise up against all odds.

Now more than ever, people from all walks of life, all races, need to hear such stories. It is especially important for our Black youth to learn about such history and let it inspire them to learn the true meaning of what people are capable – what they are capable of — with determination, love, empathy, and grace in our hearts towards all people.

I encourage everyone to seek out and read true historical accounts of the amazing Black people who changed history with their intelligence, grit, and fortitude. Stories like:

Biddy Bridget Mason (1815-1891) who was born a slave in Mississippi in 1818 and achieved financial success that enabled her to support her extended family for generations despite the fact that she was illiterate. She eventually ended up in San Bernardino, CA, walking most of the way behind a caravan, before achieving her freedom and suing her former owner. She worked hard and saved her money,

educating her children and becoming a philanthropist to the entire Los Angeles community. She also organized First A.M.E. Church, the oldest African American church in the city. (Blackpast.com)

Harriet Tubman (1822-1913) was born into slavery and gained her freedom, becoming a Underground Railroad to “conductor,” abolitionist, and suffragist. During the Civil War, she served the United States Army as a spy, scout, nurse and cook, and provided badly needed nursing care for African-American soldiers and civilians. (U.S. National Park Service)

Frederick Douglass (1818-1895), born into slavery in 1818, Douglass was not allowed to attend school so he taught himself to read and write in the streets of Baltimore. He also educated other slaves, physically fought back against a “slave-breaker,” and eventually gained his freedom. He became an abolitionist and served under five presidents as U.S. Marshal for D.C. (1877-1881), Recorder of Deeds for D.C. (1881-1886), and Minister Resident and Consul General to Haiti (1889-1891).

These stores, just a few of many, are truly amazing for what these people accomplished – not only for themselves, but for others and society. I encourage everyone to learn more about such individual leaders and let them inspire you to greatness as well!